By Michelle Odorico, violin
Michelle Odorico joins the orchestra on her first Tafelmusik tour – and what a way to begin, travelling to China and South Korea and playing a fully memorized Bach program! We’re proud to say that Michelle is an alumna of Tafelmusik’s artist training programs: she was first introduced to baroque violin at the Tafelmusik Baroque Summer Institute in 2012, inspiring her to pursue a Master’s degree with Jeanne Lamon at the University of Toronto. She attended TBSI twice, and the Tafelmusik Winter Institute four times, last year featuring as concerto soloist. It’s been thrilling to see her playing with the orchestra this fall: in Opera Atelier’s production of Dido & Aeneas, and in our mainstage concerts celebrating the choir’s 35th anniversary. We asked her to submit a few blog entries while in Asia so that we could travel along with her on her first Tafelmusik tour. 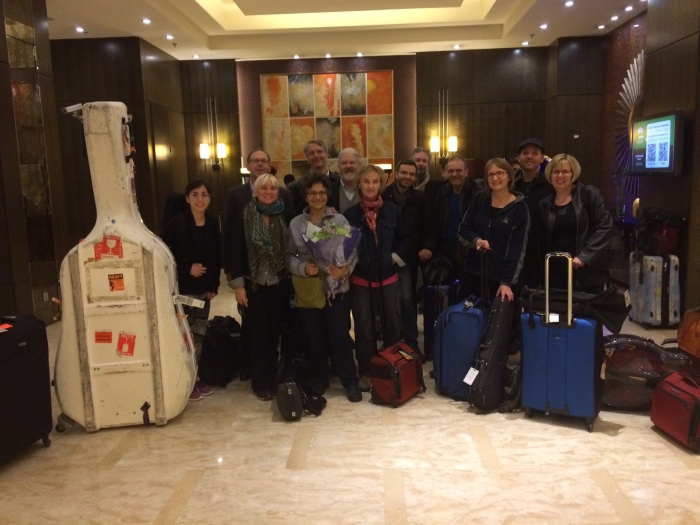 We landed in Shanghai late afternoon on Wednesday. It was my first fourteen-hour flight, and as much as I enjoyed watching three movies back-to-back, I have a new-found respect for those who travel overseas on a regular basis. We were warmly greeted at the hotel with hot tea, flowers for Jeanne, and a “Welcome Tafelmusik” page on their lobby screen.

Thursday was our free day to recover from the long flight and adjust to the new time zone. I tagged along with violinist Julia Wedman and guest harpsichordist James Johnstone, who is here from London, England.

We planned to go to the Yu Gardens but we missed the entrance and ended up walking around the western wall of the gardens, where we absorbed the authentic feeling of the old city with its tiny streets and street vendors making food in front of their homes. There we nearly met our demise by Shanghai’s silent killer – the electric motorbike. They can come from any direction at any moment without warning and poor unsuspecting tourists would benefit greatly if they would use their bell.

We finally found the entrance to the gardens. Created in 1569, the Yù Yuán means the Garden of Happiness and was the largest and most prestigious garden in all of Shanghai. Our favourite part was the dragon and the beautiful tiled roofs. We stopped for a refreshment at the “local coffee shop” (aka Starbucks), and then walked through the main tourist area, which we immediately dubbed “Selfie Square”. Selfie sticks were in abundance and so we decided to join in ourselves.

Many of us from the orchestra visited the South Bund Fabric Market on our free day. It is a three-story building filled with suits, coats, dresses, scarves, etc. There you can have the outfit of your choice in any material, colour, or size that you need — delivered to your hotel a few days later!

Friday was a full rehearsal day at the Shanghai Mass Arts Centre. We rehearsed in a dance studio and had a productive day, despite it feeling like the middle of the night.

Later that evening, a group of six of us wanted to go on a boat tour see the stunning architecture along the Huangpu River, which runs through the centre of the city. I took a taxi with violinists Jeanne Lamon and Patricia Ahern. In a second taxi were Alison MacKay (double bass), Allen Whear (cellist) and Raha Javanfar (projections designer). We ended up being dropped off at two different boarding stations and got on two different boats. Jeanne spotted them on the other boat as they passed us.

On Saturday we had a rehearsal with David Zhang — (our narrator for the Chinese performance), who learned the show remarkable quickly and whose beautiful English helped the rehearsal process tremendously. In the afternoon we had a small but appreciative audience of patrons from the Shanghai Mass Arts Center.

That evening, we went to a really cool area — the French Concession — and had dinner at the fantastic “Green and Safe” restaurant. It is right across from the Shanghai Conservatory where cellist Allen Whear taught and performed earlier this year and has a bright and warm atmosphere — both the food and company were wonderful!