In our upcoming 2018/19 season opening concert, Mozart 40, Dominic Teresi will be featured as soloist, performing Mozart’s Concerto for bassoon in B-flat Major. 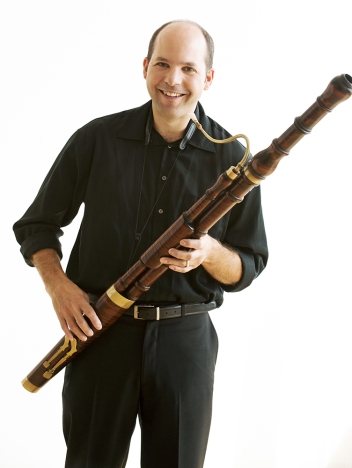 As a wind player in Tafelmusik, I need to own several instruments that I switch between depending on the period or style of music and the pitch required for each concert. I currently own nine different types of bassoons, six of which I play regularly in Tafelmusik. They are all modern copies of original instruments from the seventeenth and eighteenth centuries, since woodwinds do not stand up to the tests of time as well as do stringed instruments. Over the centuries, exposure to moisture, fluctuations of temperature and humidity, as well as insect damage have all tended to damage the wood of most surviving baroque woodwinds, rendering them unplayable today.

The bassoon I play most frequently in Tafelmusik is a copy of an instrument by Johannes Scherer from the early eighteenth century. Scherer lived in central Germany, more or less contemporaneously with Johann Sebastian Bach, and his bassoon is especially well suited to the works of Bach, Handel, and Telemann. My bassoon was made by the Wolf family from Kronach, Germany in 2014. I have a very close relationship with the Wolfs and own several of their instruments. Father and founder, Guntram, passed away in 2013 and the business is now run by his children, Peter and Claudia.

On our opening program, Mozart 40, in September, I am performing Mozart’s bassoon concerto on an instrument copied after an original by Heinrich Grenser from around 1800 and made by Guntram Wolf in 2011. This is I think the fourth classical bassoon I have played in Tafelmusik, and it was a bit of an unexpected acquisition. In August 2011 during Tafelmusik’s annual residence at the Klang und Raum Festival in Irsee, I visited the Wolf workshop to have my bassoons worked on and they happened to have a few finished classical bassoons ready that were not already spoken for, which is a rare occurrence. I of course had to try them all out and was immediately attracted to one particular instrument with an especially beautiful flame in the grain of its wood. It turned out to also have a incredibly rich sound, and I decided I couldn’t leave without it. I once had the opportunity to play the original Grenser that mine is copied after, which is owned by a colleague in Austria, and can verify that mine is a very true replica that feels and sounds very much like the original. This is the bassoon I play for Haydn, Mozart, and Beethoven — and have even used it when we’ve played early romantic composers such as Schubert and Mendelssohn.

For the very earliest repertoire Tafelmusik plays, such as the seventeenth-century Italian composers that you will hear on our February program, The Tempestuous Violin, with Enrico Onofri, I have two bass dulcians copied after an original in the Sammlung Preussischer Kulturbesitz in Berlin, one pitched at A=440 (standard ‘modern’ pitch) and one at A=465 (a half-step higher). These were both made by the German maker Martin Praetorius, who has a wonderfully appropriate name for a historical woodwind builder (although he assures me he has no relation to Michael Praetorius, the famous seventeenth-century composer and theorist). Martin is an exceptionally skilled craftsman and is able to replicate very closely the dimensions of the original instruments he copies. Whereas many copies by other makers feel bulky and awkward to hold and play, mine are light and agile and feel very comfortable in the hands, yet have a very rich and resonant sound.

You can hear me play the newest bassoon in my collection on our Vivaldi program in October, which will also become our first recording with Elisa at the helm. This instrument is a copy of an anonymous early eighteenth-century bassoon from Sud Tyrol made by Peter Wolf. It is pitched at A=440, which was the standard pitch in Venice during Vivaldi’s time. It has a very clear, bright, and direct sound and very agile response, which makes it an especially fun instrument for playing Vivaldi. It is still fairly new to me but I’m very much looking forward to getting to know it better and to play it for you all on the Tafelmusik stage.