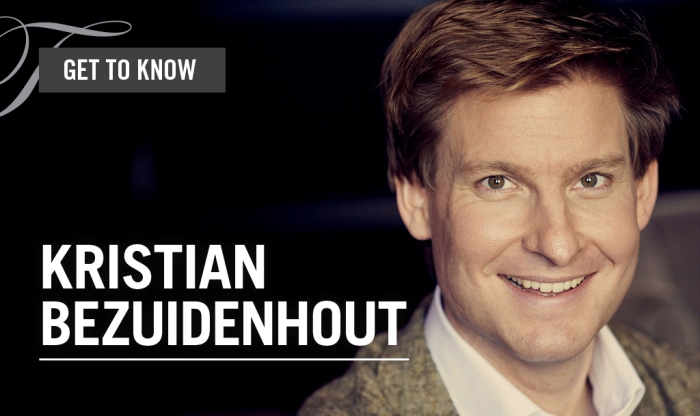 Fortepianist Kristian Bezuidenhout returns to direct Tafelmusik this November in Mozart’s Piano. Leading up to the concerts, Marketing Manager Tim Crouch caught up with Kristian over the phone while he was at his home in London, England. Here is the full conversation.

Welcome back to Tafelmusik! What have you been busy with since we last saw you in 2013?

Well, I guess it’s safe to say that one of the biggest things that’s happened since then is the completion of the solo Mozart cycle for Harmonia Mundi. Ten CDs of solo keyboard music. When I started the cycle in 2009 I didn’t have a sense that when it came to an end it would feel so bittersweet. But when volume 9 and 10 came out it felt a little bit like the cast of Will & Grace saying, “This is the final episode.” It was a really big thing to have done, to spend so much time with Mozart’s solo keyboard music — to really investigate it as thoroughly as that.

Some of the recent highlights for me have been closer collaboration with many of the groups I have admired from afar. One of them was the Orchestre Révolutionnaire et Romantique with John Elliot Gardiner: we had a big tour of piano concertos in November of last year. That was life-changing thing for me.

I have been increasingly directing more and more from the keyboard. Tafelmusik was really one of the first projects that I directed from the keyboard in repertoire like that. You know, being on the stage with a group as wonderful as Tafelmusik and exploring a program like that, playing piano concertos and symphonies and directing from the keyboard and playing continuo, is a whole different ball game. I was so touched by the positivity, and the energy and the classiness of the playing, and how natural that whole relationship felt. It was just terrific.

I think that experience really gave me the courage that I needed to set off down that path. There have since been projects with Freiburg Baroque Orchestra, English Concert, Juilliard 415, and others. One of the highlights was directing my first St. Matthew Passion, with Dunedin Consort, in an essentially one-on-a-part performance which I directed from the harpsichord and organ. It was truly one of those moments that just changes your sort of DNA overnight.

Bach has played an ever-growing role in the last few years, including performing and recording all of the Bach violin sonatas with Isabelle Faust. Rediscovering my early training as a harpsichordist at the Eastman School and the chance to spend so much time working on Bach’s keyboard music has filled me with great joy.

Tell us a bit about the program you’ve selected for this week?

This program was designed along similar lines as the first one in 2013. I think it’s always been my belief that it’s wonderful to hear a full program of Mozart, but it’s also fantastic to hear music that influenced him. Hearing Mozart in context with music of the Bach sons provides us with fascinating insights into his working methods and where he finds inspiration in the music that he hears. With Carl Philipp and Johann Christian I’d like to think that there’s a certain sense that the fusion of styles that those two composers represent finds its natural outcome in the music of Mozart. We know that when Mozart was in London he met Johann Christian Bach, and something about JC really deeply impressed Mozart. For me, it’s this inexpressible, incredibly highly refined Italianate sense of melody that Johann Christian seems to conjure, almost singlehandedly, historically speaking. I think Mozart is very touched by the wonderful artlessness of the melodic writing of Johann Christian. As to Carl Philipp, one of the things that impressed Mozart was his incredible sense of making music sound as if it is almost improvised on the spot, sometimes going to places of real extremity in terms of the gesture. I find that when you hear CPE on a program of Mozart, it sounds much more kind of lyrical and beautiful, and Mozart conversely sounds much more revolutionary and at times eccentric. I love the fact that you hear composers so differently when you hear music of composers who influenced them around the same time. And I love the contrast in textures that you get between solo works for keyboard, symphonies, piano concertos, and then strings symphonies as well. The wonderful differences in colour and taste when you hear the JC Bach Symphony, curiously for him in the key of G minor, which is so much more Sturm und Drang than we might associate normally with JC Bach. Then the kind of laser clarity and brilliance of Carl Philipp’s incredibly difficult string writing, and how that bleeds into the mature string and wind sound that Mozart conjures for the piano concerto in the 1780s. It’s a marvelous look at the laboratory element of orchestration in this period I think.

You have a very full touring schedule. What do you do to stay healthy and happy while on the road?

When you get up at 5 o’clock in the morning for a flight, you have to tell yourself that that’s what you’re getting paid for, in a sense. Then you get on stage and play with wonderful colleagues in great halls, and that’s really the part that’s free.

You know, more and more you just look a little bit to the creature comforts. The thing that I look forward to most is finding a really lovely bar in a new city and going there with colleagues after a concert and having a really nice gin martini and just experiencing the new city. One of the things I love more than anything is getting up after breakfast and just walking for hours in any new city that I’m in, or any city for that matter. The feeling of not being a tourist while you’re supposed to be a tourist is so great, because you’re walking the street and experiencing city life. I’m not one these people who forces myself into a really strict museum or tourist itinerary, as that kind of stresses me out.

Having high-speed internet connections when you’re on the road is wonderful. Recently, I have been on a mad obsession with Bach cantatas, studying scores online in hotel rooms, and getting a grip on the text and the historical context. And then there are other times when there’s nothing better than settling down with Netflix and a martini.

Who is your favourite composer to perform?

I think maybe a year ago I would have said Mozart. But recently, I would say the feeling of enrichment that one gets when one plays Bach, and I don’t mean so much playing solo keyboard music. I have never had felt quite as intensely connected with something as I felt when directing the St. Matthew Passion.
I think it’s safe to say Bach’s large-scale vocal and orchestral music — that feeling of high and incredible, almost exhausting concentration that you need to play Bach — is probably the feeling is that I’m chasing most at the moment. It’s very different with Mozart. It’s much more natural and effortless somehow, even as a player. I think increasingly I’d say that Bach is the person that fulfills that role, especially in a collaborative situation, where I’m playing continuo in sort of larger organism.

What do you like to do on a day off?

I’d say that I’m super house-proud. Honestly, I love cleaning. I love getting home and just setting things straight, getting the house tip-top. The first thing I do is I go and buy fresh flowers. Probably because life is so chaotic and you’re at a different airport all the time, I love the feeling of structure and order. I then take my physiotherapist’s advice as much as I can, to relax, and to sleep!

What was your first music gig?

Probably the first time I thought that I was actually really 100% a professional musician was a solo recital that I gave in Utrecht in 2001 after winning the Bruges competition. It was a prize concert, so it wasn’t an official engagement in a sense, but I was paid a fee — the largest single amount I had been paid for anything —and I remember in that moment thinking, “OK, this is really what is happening now.” It was a kind of kooky concert in a coffee shop, a solo Mozart recital, and my brother came … it is a really strong memory.

What are the last three recordings you listened to?

I just opened Spotify to check what I’ve been listening to:

Michael Nyman’s No Time in Eternity, performed by Céladon. It’s a fifteen-minute piece for viols and countertenor with Byrd and Tallis. It’s exquisite, a total find for me as I was just browsing around: it was on a playlist from the Ambronay Festival. I was just so struck by the beauty of this piece.

Bach Cantatas for soprano with Carolyn Sampson and Freiburg Baroque Orchestra, which was released in May 2017.

What is your “guilty pleasure” music to listen to?

Definitely ABBA — I’m not shy about it!

Who has been your greatest inspiration?

I think it’s very clear for me that that is John Eliot Gardiner. I think it’s a question of what reaches you at a certain time in your upbringing. For me growing up in Australia, many of his recordings came into my life and changed the whole way I thought about how this music would sound. Crucially, I was really struck by that when reading so many of his texts and interviews. He takes both the music and the details of the historicism of it seriously, but then at the end of the day, it is combined with really strong and sensible instincts and really top-quality playing. And I thought to myself at that moment, okay this is it. This is the field. I want to be playing old instruments because this sound just reaches me in a really visceral, strong, dramatic way. Having had the opportunity to work with him a couple of times, I am so deeply impressed by the ability for someone on that level to continually be asking themselves questions, and continually be forcing themselves to be on the highest level, despite the fact that it would be very easy to rest on decades of top-quality, path-breaking projects.

Where do you see yourself ten years in the future?

I would like to start my own group. As much as I love Mozart, the Bach sons, and Haydn, I’m dying to really get into German sacred repertoire and address a new idea for the large-scale Bach choral and orchestral works, especially the Passions. Of course, this has been done one-on-a part before, but I want it to again be reclaimed by the keyboard director at the heart of the proceedings. I think that is truly so absolutely characteristic of what the journey of directing these pieces means. I am dying to record both of the Passions with a group of eight to twelve singers and a very small orchestra. Although we’ve got countless recordings of these pieces, they do somehow bear renewed investigation every time. There is something about any audience that hears these pieces, when the performers are really engaged on that level … they think they could hear the whole thing, all three hours, again. I am so struck by that, deeply, with Bach. So, just more and more of that!