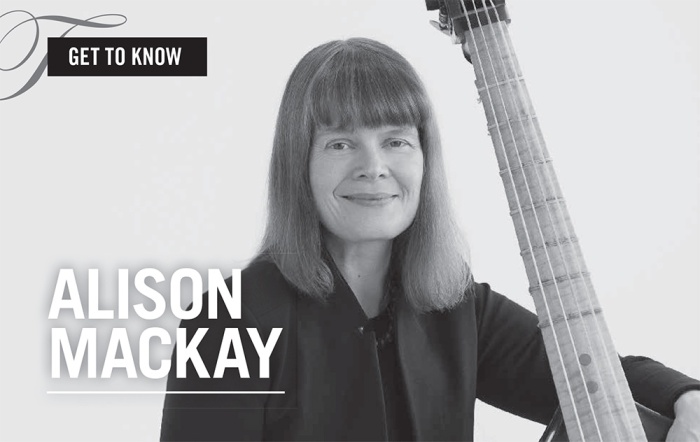 Alison Mackay has played violone and double bass with Tafelmusik since 1979, and is active in the creation of multi-disciplinary and cross-cultural programming for the orchestra including Tales of Two Cities, The Galileo Project and Visions & Voyages: Canada 1663-1763, making its world premiere February 22, 2017.

What was your first music gig?

When I was in high school I played the second and third movements of the Bach D-Minor Harpsichord Concerto (on piano) with the community orchestra conducted by my teacher, Clifford Poole. (Leslie Kinton played the fi rst movement.)

What is an example of something that has inspired you?

I had a lightning-bolt moment attending a midnight tour of the Great Mosque of Cordóba in Spain. We were 20 visitors in the huge, darkened, dramatically-lit building, which now is part mosque, part Catholic cathedral. We walked from place to place guided by a narrator speaking through earphones in Spanish, English, French, or Japanese … The fascinating narration was accompanied on the soundtrack with beautifully performed music, perfectly chosen for each epoch being discussed. There we were, a group of 20 people from around the world with diff erent languages and backgrounds, being educated and transported by a beautiful cultural experience that was completely scholarly but also completely accessible.

What are the last three recordings you’ve listened to?

When I’m planning for a special project I get obsessed with the music and how it will overlap with the narration and images. I’ve been listening to the chaconne, earthquake music, and passepieds from the opera Sémélé over and over — I’m afraid that by now David [husband David Fallis] knows the music as well as I do.

What is your favourite thing to do in Toronto during your free time?

Close to home I love to work in the garden. We have a small garden at the front of the house and a small one in the back. At some point we decided to leave the front to me and the back to David. I love colourful hybrid plants and he favours native species. This way we don’t need to negotiate! On the other hand we can agree on the beauty of the High Park Sakuras — 2,000 flowering cherry trees donated by the government of Japan to thank Toronto for its harbouring of Japanese-Canadian refugees after World War II. There is a “bud and blossom watch” website that tells you when the trees will be in their glory and we like to make a pilgrimage to see them every spring.

What’s your favourite restaurant in Toronto?

I love the Persian cooking and the beautiful atmosphere at Pomegranate Restaurant on College Street. There are so many different flavours in each dish, and the walls are decorated with colourful ceramic tiles and textiles. We have celebrated many special occasions there with family and friends.

Where is your own, personal, oasis in Toronto?

When the weather gets really cold I love to go to the greenhouse at Allan Gardens to soak up the warmth, humidity, and scented, lush greenery and blossoms. It is wonderful for a visit at any time — open every day of the year from 10–5, and it’s free!

You have a night off — what do you do?

We have a group of eight friends who have had dinner together once a month for over 30 years. Finding the evenings for those get-togethers is a challenge since David and I are so rarely free on the same night. Luckily our friends are patient and flexible!

What is your great ambition?

To have my bicycle lock last as long as I ride my bike. I am still using the lock from
my locker at Jarvis Collegiate, and if I ever have to memorize a new combination I will be lost.

Where do you see yourself ten years in the future?

Apple or PC?  Apple all the way.

Starbucks or Tim Hortons?   Tim Hortons! I think Tim Hortons has transformed the social fabric of communities in Canada.

TTC or “anything else that gets me to my destination”?  Bicycle!

Tidy or cluttered desk?  Clutter! Even the floor around my music stand at Tafelmusik rehearsals is always covered in stuff.