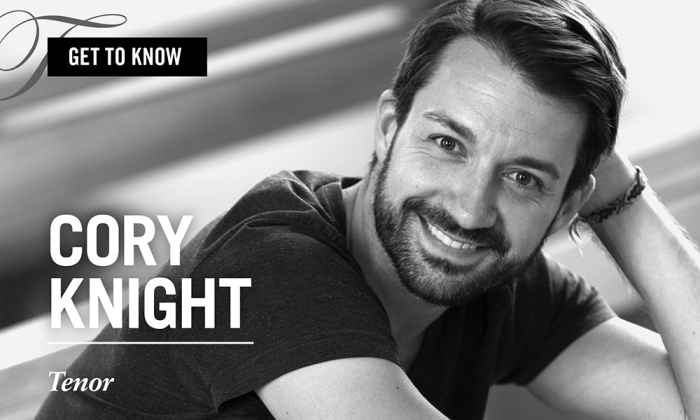 Tenor Cory Knight first joined the Tafelmusik Chamber Choir in the fall of 2010, shortly after participating in the Tafelmusik Baroque Summer Institute. In 2012 he moved to Switzerland to pursue a Master’s degree in Historical Performance Practice at the prestigious Schola Cantorum Basiliensis. He rejoined the Choir upon returning to Toronto, and balances his career in Canada with engagements in Europe. He was recently featured as the Sailor in Opera Atelier’s production of Purcell’s Dido & Aeneas.

How did you come to decide to sing?
I’ve always been interested in music and fortunately I have parents who are very supportive of that. They signed me up for piano and voice lessons and drove me to all kinds of rehearsals when I was a child. My plan was to be a high school music teacher, but after I finished my teaching degree I thought I’d give this singing thing a try. So I auditioned at the Glenn Gould School and was accepted into the vocal program that year. I met some important professional contacts and mentors through that experience and haven’t looked back since.

What was your first music gig?
I played a sailor at my Kindergarten graduation. It was a big deal. But my first professional gig was with Opera Atelier. I was cast as Telemaco in Monteverdi’s The Return of Ulysses.

Who has been your greatest inspiration?
Probably my grandfather, who taught me that no job is as difficult as picking tomatoes. [Cory comes from Leamington, the Tomato Capital of Canada.]

What is your ‘guilty pleasure’ music to listen to?
My grandmother recently gave me her old LPs and I’m currently making my way through them. There’s a Patsy Cline album in there that I just can’t get enough of.

What is your favourite thing to do in Toronto during your free time?
I love walking around the city and discovering little places that I’ve never seen before.

What is your favourite restaurant in Toronto?
Smoke’s Poutinerie.

Where is your own personal oasis in Toronto?
I really enjoy my apartment in the Village. The neighbourhood is so vibrant, and I love the mix of people and general energy. But when I’m not at home, I love Kensington Market, Toronto Island, and wandering the paths in Don Valley.

Are you involved with any clubs/charities in your off-time?
I volunteer as a Youth Mentor through Catholic Children’s Aid Society. Basically I get to hang out with a really cool kid who keeps me up to date on the latest Nerf toys and video games. I’ve also spent most of the past 20 summers working at camp.

You have a night off—what do you do?
I get cozy on my couch with some yummy snacks and watch movies.

Where do you see yourself ten years in the future?
In my 40s.

What words of wisdom would you pass to budding musicians?
Practise, practise, practise. Find joy in everything you do. Follow your instincts. Be patient. And when things get tough just remember that you could be picking tomatoes.

Apple or PC? PC
Starbucks or Tim Hortons? I’m faithful to my small town roots on this one: Timmies.
Cat or dog? Dog
City or country life? A healthy amount of both.
Hockey or baseball? Hockey
Batman or Superman? Depends on which nephew I’m hanging out with.
TTC or “anything else that gets me to my destination”? TTC
Favourite season? Summer
Favourite instrument? I played trombone in high school and university. So, trombone. But I’ve always loved the viola.
Old or new? Old
Tidy or cluttered desk? Tidy