Following an all-too-short night’s sleep (I’m not usually an early riser as my colleagues will attest, but the time difference led to me waking at a horrible hour), we were off onto the next leg of the tour – to Victoria

One of the things that scares me most about touring is being late. At my previous Orchestra, if you were (especially as management) last on the bus you’d get a little (semi-jovial) jeer. Once, a colleague slept through his alarm and actually missed the bus – he never lived it down. Anyway, thankfully my early start meant I was there in time.

The trip to Victoria of course involves a ferry ride. I’ve done this once before on holiday (sorry, vacation) so knew how special it was. Luckily the weather had improved somewhat and we had the added treat of doing it with clear blue skies and bright sunshine, so the views were especially incredible. Most of the Orchestra spent the entire trip on deck taking it all in, and we had the very special treat of seeing some orca whales off in the distance.

While taking in the scenery I was able to chat to some of the Orchestra, including our harpsichordist Charlotte. Now of course when Orchestras go on tour everyone takes their instruments with them – sometimes tricky for cellos and double basses, but quite do-able with a helpful airline. However a harpsichord is a different kettle of fish entirely, so we tend to find an instrument local to each venue. This poses challenges for harpsichordists as they have to adapt to the instrument pretty quickly, and musicians have an understandably close relationship with their instrument. For example, Charlotte told me that the instrument in Vancouver had much wider keys than her regular instrument, which meant it felt really rather different under her hands. Just one more little thing about touring which wouldn’t necessarily occur to you.

After a brief stop at the venue to drop off production equipment and the set we continued to our hotel – with some curiosity it seemed. The Orchestra has stayed at this particular hotel for years but since our last trip it has been taken over by a chain, so we weren’t sure what to expect. This reminds me of another little oddity of touring – the essentialness of having all the rooms ready for check-in as soon as the orchestra arrives. You really don’t want a group of tired musicians being told to come back later because their rooms aren’t ready, and nor do you want a complicated check-in process for everyone – you want all the keys there ready for immediate hand-out. I overheard my colleague Beth calling the hotel as soon as we were off the ferry to make sure everything was in hand – and indeed it was.

We now had a few spare hours to spend in beautiful Victoria, and I mused that when I was last here I had ZERO expectation of being back so soon and even less expectation that I would be working for a Canadian Orchestra – it’s funny the turns life takes!

The evening’s performance was at the Alix Goolden Hall, a beautiful converted church with a great sound – and apparently the inspiration behind the renovation of our very own Jeanne Lamon Hall back in Toronto. It was another sold-out show and another very appreciative audience.

Back at the hotel we discovered the downside of the new ownership – the bar had closed already! The hotel bar is usually the centre of post-concert social life so this was something of a shame – the hotel redirected us to a rival hotel for drinks, which seemed like an interesting business decision…

After a quick tipple we were all VERY ready for bed and day three of the tour.

Our tour bus (plus some reflections of Vancouver)

Bobblehead Bach on the ferry

Arriving at our hotel 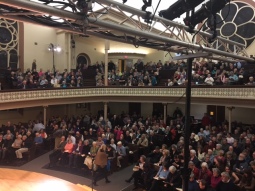